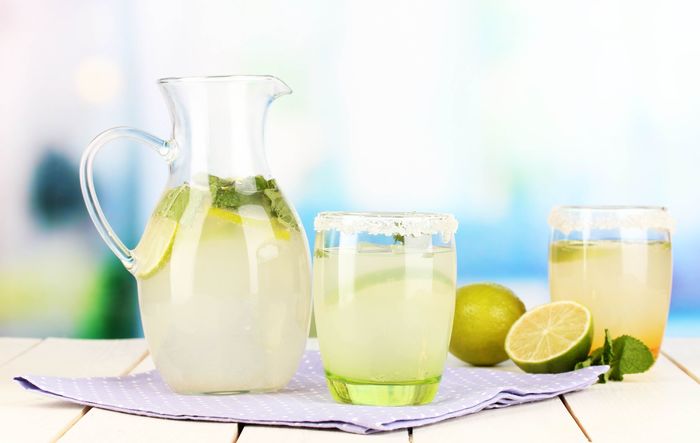 Lemon juice is the liquid obtained from the endocarp of the lemons when squeezed. It is usually about 30% of the weight of the fruit.

Its distinctive sour taste is due to citric acid. These acids cause a reaction in our palate, which "defends" itself by increasing salivation so that the acid dissolves and its harmful effect on the oral epithelium is reduced.

Lemon juice is normally sour, however, it can eventually turn bitter as the lemons start to go off.

It is often used in cooking in order to give a sour taste to culinary preparations, i.e. it is added to some vinaigrettes. Lemon juice is used in marinades for some meats before they are cooked: the acid from the lemon partially hydrolyses tough collagen fibres from the meat (which tenderises it). Used as a salad dressing, sometimes replacing vinegars, and it is also more digestive than these. Used for fish ceviche. It is used to add some flavour to baked goods: cakes, pastries, etc.

Lemon juice, together with water and sugar, are the main ingredients of lemonade, which can be used in cocktails and to add some flavour to several infusions.

In order for some foods not to oxidise when in contact with the air (aubergines, cut apples, bananas, avocados and vegetables such as chopped potatoes), some drops of lemon juices can be added so that its acid avoids the browning of these foods (as some areas turn brown).