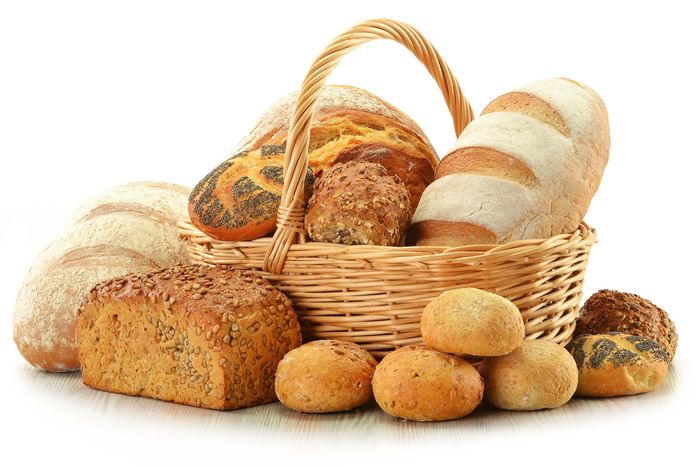 Bread is a basic and relatively cheap food that is part of the traditional diet in Europe, the Middle East, India, America and Oceania.

It is usually prepared by baking a dough, elaborated with cereal flour, salt and water. Most of the times, this mixture contains leavening so that it ferments and becomes fluffier and more tender.

Wheat flour is the most used cereal to make bread. Rye, barley, corn and rice are also used. There are many kinds of bread that can be made of other ingredients such as different types of fat (pork or beef fat, butter, olive oil) eggs, sugar, spices, fruits, dried fruits (like raisins) vegetables (onions) or varied seeds.

Leavening makes the dough ferment before the baking. It produces little carbon dioxide (CO2) bubbles that remain inside the wet mixture of flour. Consequently, the dough gets spongier and its volume grows.

The bread that has been made without leavening is called unleavened bread. Because of its lack of yeast, it is not as fluffy as the usual bread. Most likely, traditional procedures for making bread did not contain leavening, and flour was obtained by roughly milling grains and mixing them with water. Then, this mixture was dried by putting it in the sun or introducing it in the ashes of a fire. Plain bread, very popular in some cultures, could very well be the most ancient one. Bread has variations with distinguishing designations. These are biscuits and cakes, which contain different amounts of sugar. Probably they emerged from experiments of bakers who wanted to create “more portable” and there many kinds of bread.

The dough can be shaped in different ways, using varied moulds and kneading techniques. There are baguettes, braids, rings, etc.

Avocado and mayonnaise pintxo with prawns

Carrots and oatmeal burgers with salad

Squid stewed in their own ink with rice pilaf and salad

Stewed squid in their own ink

Stewed squids in a sauce made with their own ink