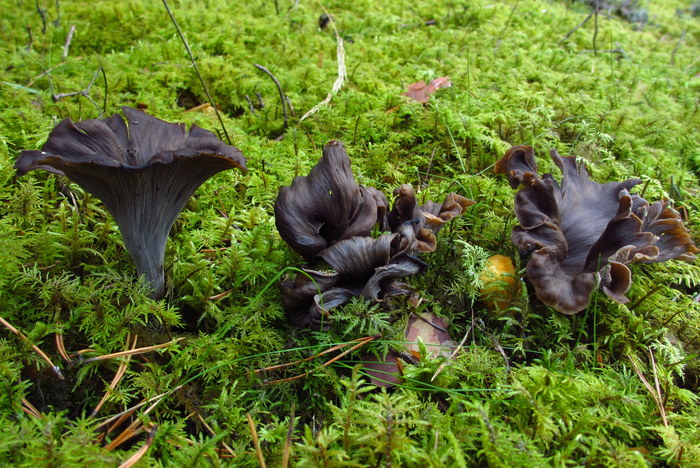 Also known as trumpet of the dead, black trumpet, black chanterelle or horn of plenty, in Spain it receives the name of poor people’s truffle since it has a similar flavor.

They have an interesting morphology, since they are like an empty funnel on its center; the cap is fragile, wide, curled and soft. The long and slender stipe and the interesting cap make up for a quite peculiar and eye-catching shape together. Its color is always quite dark and there can be variations between ash grey and dark blue.

The best time to pick this kind of mushroom is autumn, but they can be dehydrated so they can be consumed all year through. They grow from the end of summer to the end of autumn and it does so in humid grounds and beech or oak forests. They’ll be easier to find next to moss lichens and fallen leaves.

They grow in big packs which may be a wonder to see. If consumed fresh instead of dehydrated they can be stood on the fridge for up to 3 days and they must always  be cooked before being consumed. We must be careful when picking them up with a knife, just like with any other mushroom. If it has been raining throughout the summer, we can pick them up from mid-August to November. The only other mushroom with which it can be mistaken is the Craterellus cinereus, which is also edible and has a sweet taste and plum aroma.