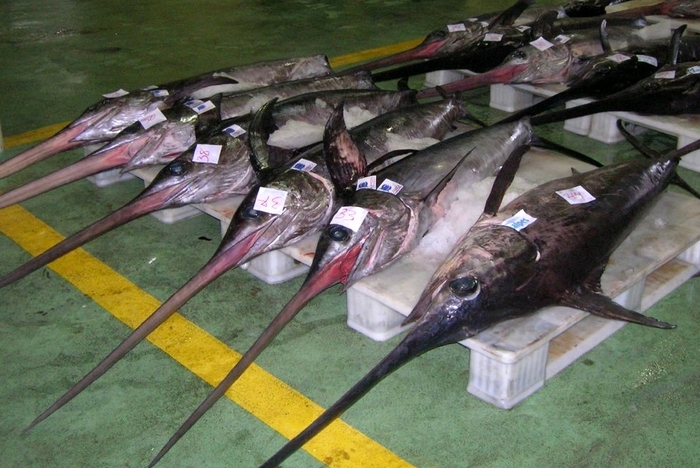 The swordfish, whose scientific name is Xiphias gladius, belongs to the Xiphidae family. Other common names include broadbill, espadarte in Portuguese or emperador in Spanish. Some species are mistaken for emperador but are completely different.

It is a bony saltwater fish. It lives in depths between 200 and 800 metres. It lives in warm waters all around the globe where temperatures rise above 15°C, but it can also swim and hunt in waters around 5°C.

Swordfish are aggressive and voracious. They feed on mollusks and different types of fish and cephalopods.

The body of the swordfish is blue or black except for its belly, which is silver. They have a huge, long and compressed body and spiny fins. Their dorsal fin is big and they lack pelvic fins. They can reach more than 4 metres length and more than 500 kg of weight although the average swordfish measures around 2 to 3 metres long and weighs 120 kg.

They are characterized by the fusion and prolongation of the bones in their upper jaw, which form a rigid bill similar to a sword, from which they take their names. Sometimes it can be a third of its body length. They use their bill as a weapon for hunting prey and as a defense against predators.