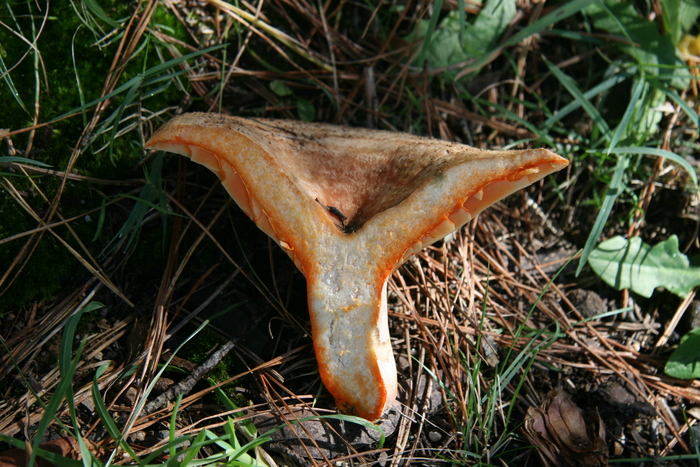 The saffron milk cap or red pine mushroom (lactarius deliciosus), is an edible basidiomycota fungi from the russulaceae family. It’s a fairly common mushroom in Spain and it grows on pine groves and mixed forests. The mushroom emerges in autumn and it’s highly valued in cooking.

The stipe is hollow and short, cylindrical-ish or a bit narrowed on its base. Grainy structure: thick on its earlier stages, when it grows more it has hollow parts but it’s still tough. It’s the same color as the cap but a bit paler, with some more intensely colored small superficial holes. It usually has parasites and so it becomes more fragile. The cap may vary in size between 4 and 16 cm of diameter and its orangey color is altered by pale and red concentric circles. On its young stages the cap is coiled on its edges and it flattens as it grows older until it achieves its funneled shape. The gills have the same color; they are compacted thin and decurrent. The flesh is dense and compacted with a mild and sweet aroma when cooked and a bit sour when raw. It releases orange latex when cut. It oxidizes quickly, acquiring a somewhat green color when it grows old or some time after picking them. One of its pigments is processed through our kidneys and that’s why the urine may have a funny color, so don’t panic.

The different opinions it gathers may be due to how its flavor varies depending on the ground it grows in, or that many times people get saffron milk caps mistaken with other similar species or they pick mushrooms with many green spots due to old age, being battered or with parasites in them.