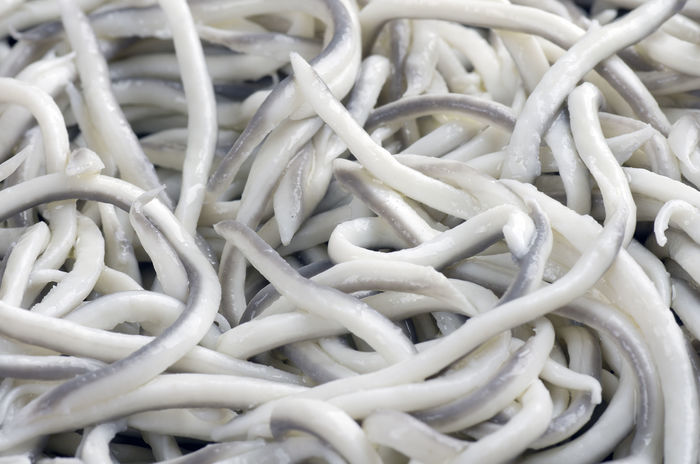 Baby eels.  Eel farming works like this: every eel goes to the Sargasso sea to spawn. Once the lavae has hatched from the eggs they are around 5mm long and they are shaped like a leaf. They get together forming huge balls and go to the open sea. It will take them at least three years to reach the estuaries. During this time they feed on each other. They remain in those estuaries until the stronger autumn waves take them to the rivers. They can be found in all rivers throughout Europe except for the ones that flow out into the Black Sea. Their consumption was restricted to Vizcaya and Guipúzcoa but they are now consumed in more zones.

When the elver gets to us it weighs around 1 gram, and it is less than 8 cm long, but it is already 3 years old. The elvers we buy are usually already cooked.

In case of getting life elvers, (they are transparent), they must undergo this procedure:

1) They are washed under cold water as many times as necessary in order to remove any dirt or mucus.

2) After this, they are quickly killed.To do so, a tobacco infusion in water is prepared, which is poured over the elvers once it is cold.

3) After killing them, they are washed again with a lot of water, and they are thoroughly cleaned because the mucus will clot when boiling, forming a white membrane over them.

4) Later they are cooked in boiling salted water.

5) They are removed, drained and placed over a cloth, which is where they must be preserved. At this moment, the elvers are just like they are sold (nowadays they are sold vacuum-packed). To cook them, olive oil, sliced garlic and pepper are added to a clay pot. When the garlic browns the pot is removed from the heat and when the oil loses strength, the elvers are added and placed back on the heat until the oil boils over high heat again. They can also be cooked without being boiled after killing and cleaning them.

They are served in the same pot with a wooden fork.  An average portion is about 100 grams.

White and black elvers can be found in the market. The difference is that the white ones have been less time in the river, making them thinner and less appreciated.