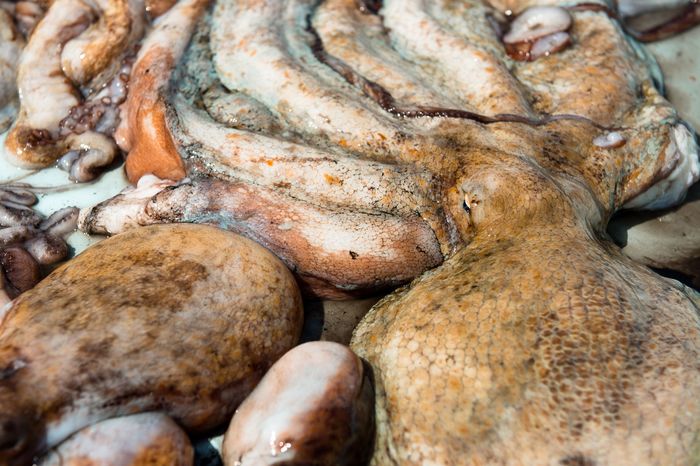 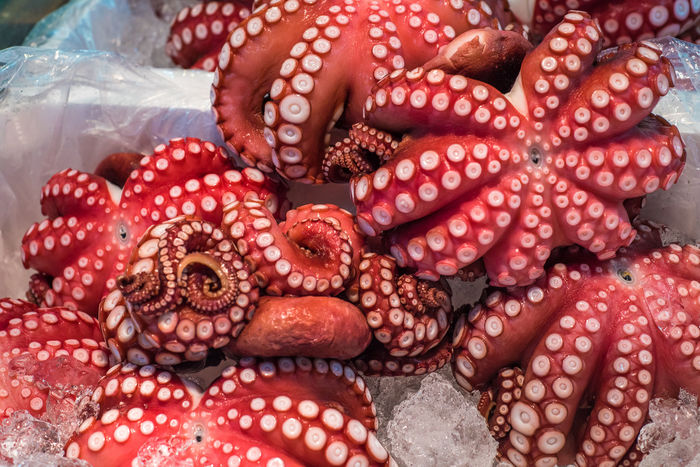 It is a cephalopod octopod mollusk. It lives in rocky beds in coastlines among rocks and stones and sometimes in crevices. It lives in depths less than 200 metres.

They feed mainly on small crustaceans such as crabs and bivalves, fish and scraps.

It is an animal that camouflages with its environment, making it difficult to spot. It even shrinks its skin to look like a rock with algae. Octopuses have a muscular and flexible body and they can hide in spaces 10 times smaller than them.

All eight tentacles of the octopuses are strong and have two rows of sticky suckers.  Tentacles are located around the mouth and linked by a membrane, the first pair being shorter than the rest, which measure approximately double its body size.

The octopus is caught all year round. It can be bought fresh, cooked or raw, frozen or preserved (just the smaller ones) and sometimes dehydrated.  It is usually sold clean and with tenderized meat.

In comparison with the rest of seafood, octopus has low energetic values and low cholesterol and protein content. Among its minerals calcium (144 mg for each 100 g) is significant as well as vitamins A, B3 and in lower quantities B1 and B2.

To clean it, first the tentacles are separated. After that, it must be turned inside out, cut, and have its eyes and mouth removed. Then, it is recommended to put it in boiling water for a few minutes so it can be peeled more easily. To tenderize its meat it can be hit on a hard surface or frozen for about three days.

Small-sized octopuses usually have tender tasty meat so it is not necessary to tenderize. Only tentacles are eaten in bigger octopuses.

Octopus meat has a great taste thanks to their diet.  It can be boiled, broiled or fried. It goes well with garlic, onion, tomato, lemon, olive oil, pepper, ginger, wine or soy sauce. Its ink can be used to make sauces for this dish or other dishes like pasta or rice. Its ink can be bought on the market separately, in small bags or frozen.