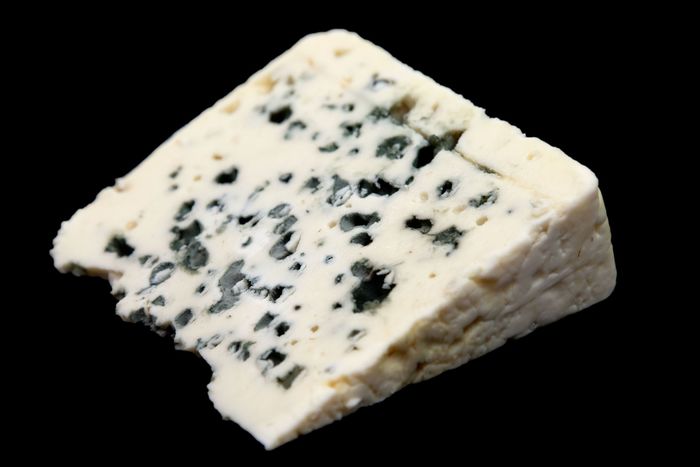 The distinctive of these cheeses is the presence of mould, which give them their greenish or bluish colours. It may be the variety causing the biggest repulse at first glance, which may recall that of decomposition, but its intense flavour is one of the most appreciated by the cheese gourmets.

In order to make the mould proliferate, the cheese must be kept in places with very high humidity, usually about 90%. Caves have traditionally been excellent places for that. Moulds proliferating in cheese are usually the ones called Penicillium, and many species get the name of the cheese they are found in: Penicillium camemberti (in the crust of the camembert), Penicillium roqueforti, of the Roquefort cheese. A completely false popular belief is that these cheeses contain worms or larvae; the cheese containing those is the warm cheese from Sardinia.

One of the usually called “King of cheeses” is the Roquefort, produced in the French caves of Roquefort.sur.Soulzon, as it is recognised in its protected appellation of origin.

Other famous mould cheeses are the Cabrales from Asturias, the Silton cheese from England, or the Italian gorgonzola cheese, that can be found in a sweet variety (although a little spicy), and another with a much stronger and spicy taste.